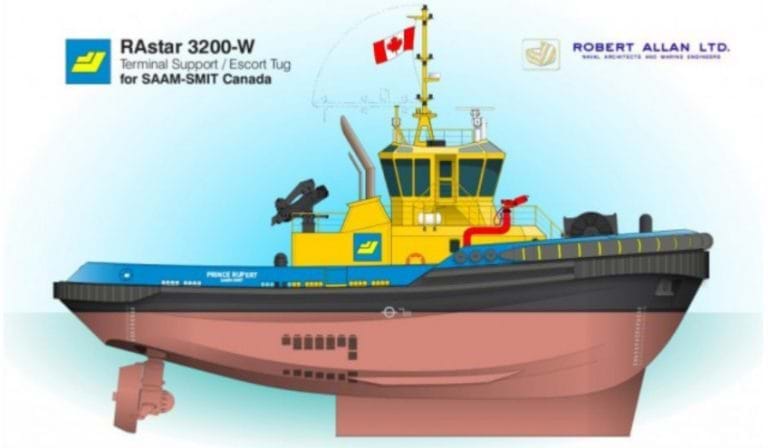 It is our great pleasure to announce that UZMAR SHIPYARD of Turkey has officially joined the Robert Allan Ltd. Century Club, with construction underway on its 100th tug to a Robert Allan Ltd. design. This new tug is a well proven RAstar 3200-W destined for service on Canada’s West Coast with SAAM-SMIT Canada.

This new tug is a great fit for this significant milestone, as it represents the state-of-the-art in the design and construction of ASD escort tugs in a sub-500 GRT hull. With its RAstar hull and deep skeg, the design is optimized for generating high indirect escort forces and is also capable of providing towing operations from the stern. The tug features several other notable features such as gas detection, explosion-proof deck equipment, off-ship fire-fighting capability, and one of the first applications of an IMO Tier III emissions compliant propulsion package on a tug. Together, these features will make this newbuild the most advanced and capable tug in SAAM-SMIT Canada Inc.’s fleet, and one of the greenest tugs in the world.

Delivery of this major milestone in UZMAR’s history of building high quality tugs is expected in early 2019, providing yet another illustration of UZMAR’s record for delivering tugs with remarkable speed and efficiency.

Robert Allan Ltd. is also pleased to share that UZMAR is hard at work on reaching new milestones, with construction of eight other tugs also currently underway alongside this new RAstar 3200-W at their modern shipyard in the Kocaeli free zone. These tugs include six (6) new RAstar 3200s and a pair of RAmparts 3000 tugs, all designed by Robert Allan Ltd. In addition to those tugs already under construction, UZMAR will soon start building twenty (20) tugs each of 50-85 tonnes BP. These are the latest additions in UZMAR’s advanced building programme from which they have delivered dozens of tugs to owners all around the world.

Others to look forward to in the “next 100” from Robert Allan Ltd. and UZMAR include the new RAstar 3000-UZM, RAmparts 2300-UZM and RAmparts 2500-W designs, all of which are being actively advanced by the UZMAR production design team. Work is also underway at Robert Allan Ltd. on new “UZMAR exclusive” DRAfter 2500-UZM and RAVE 3200-UZM tug designs, and both companies are eager to see these join the UZMAR product portfolio in the near future.